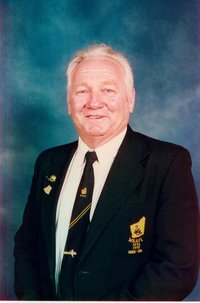 Doug was the Bayswater reserves coach in 1975 and 1976 as well as coaching local junior football teams.

He was on the club’s executive for more than 21 years, holding various roles including Vice President from 1977-78 and President in 1979.

For many seasons Doug and his family coordinated gate keepers for all WAAFL preliminary and grand finals.  In 2000 Doug volunteered his time to the assisting the League’s relocation from Leederville Oval to Subiaco Oval, revamping the office and general maintenance.

Doug was awarded WAAFL life membership in 1986 and Australian Sports Medal by the Australian Government for his services to Australian Rules Football in 2000.

The clubrooms at the Bayswater Football Club are known as “The Jamieson Frame Pavilion”, named after Doug Frame and Colin Jamieson, another Bayswater Hall of Champions Inductee.