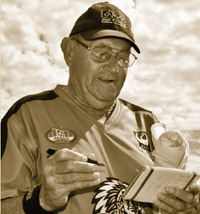 The WAAFL has great pleasure in welcoming Bob McDonald to the Hall of Champions for his dedication to community football.

In 1953, Bob played a full season of WAFL Reserves for West Perth Football Club though having cartilage problems in his left knee.

The West Perth trainer advised him at the time to tape a half-penny to his knee for support and strength.

The following year in 1954, Bob was cleared to the Subiaco Football Club to follow in the footsteps of his uncles, Brighton and Ozzie Diggins.

After playing two games with Subiaco, with no half-penny taped to his knee, his knee collapsed and he was told by Subiaco officials that he would end up a cripple and a liability to the club.  He was subsequently cleared to the Wembley Amateur Football Club.

Bob McDonald played 128 games for Wembley.  A majority of these in his preferred full back position.  He was a Vice Captain and a premiership player in 1958 and 1959.

Due to work and living commitments, Bob transferred to the Bayswater Amateur Football Club in 1965 where he stayed until 1973.

He was Captain, Coach and a premiership player in 1967 for the club.  He played another 174 amateur games, taking his WAAFL tally to an impressive 302 games.

Of these 302 games, each was played with the half-penny taped to his left knee.  In Bob’s words, “I never missed a game”.

Bob became an umpire in 1982, and was a member of the WAAFL Goal Umpires Panel officiating in over 1600 games.

He has umpired 37 WAAFL grand finals and 12 state amateur games.

Bob was awarded WAAFL Umpire of the Year in 1996.