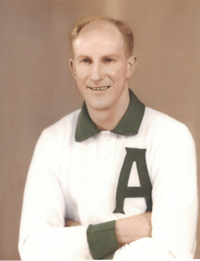 The WA Amateur Football Club has great pleasure in welcoming into our Hall of Champions a man who many regard as perhaps the best player in the history of amateur football in this state.

Brian Francis Lambert has been deemed a Champion and joins a select band of WA amateur footballers to achieve our highest honour.

Lambert played in the ex-scholars competition for both Fremantle and Cockburn before joining North Fremantle in 1963.Three times he was selected in All Australian sides - in 1962, 1965 and 1968 – and was vice captain in 1968. He represented amateurs in State sides in 1962, 1964 and 1967 and was the WA captain.

Renowned Western Australian football journalist, the late Geoff Christian, named Lambert as the best amateur footballer he saw play. Lambert won the fairest and best award in the A Grade amateur competition three times, playing in the ruck, in 1962, 1967, and 1968.

Lambert learnt his football at Fremantle Boy's High School where he also played rugby league.After leaving school, he joined the Hamilton Hill under-18s and in two consecutive games kicked 21 goals and 17 goals. The following year South Fremantle played him in their Thirds team where he won the fairest and best, polling 67 votes, more than double the runner up.

In 1960, South Fremantle selected him for one game. But, true to his amateur leanings, Lambert turned down a league career to play in the amateur competition. He was the only Western Australia chosen to play for the Australian amateur team in a Canberra carnival when the amateurs competed in the B Division against state league teams from New South Wales, the ACT and Queensland.

In the 1962 Carnival Lambert won the Grosvenor Trophy for the Fairest and Best Player and three years later the medal as the Most Serviceable Player.

The WAAFL takes great pleasure in adding Brian Lambert to the Hall of Champions as a designated Champion of Western Australian amateur football.