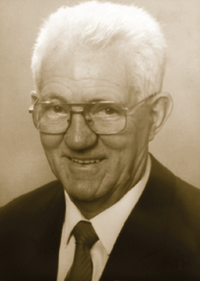 The WAAFL is proud to announce that a footballer who made a significant contribution to WA football will join the prestigious list of gentlemen that make up the WAAFL Hall of Champions.

Born in 1928, Ken Mathews achieved his dream of playing WAFL football for the West Perth Football Club, though playing mainly in the seconds, before later moving to the Subiaco Football Club.

In 1961, Ken’s dedication and commitment was recognised by the West Perth Amateur Football Club when they awarded him Life Membership.

After playing 180 games of football, he finished his playing career in 1966 and joined the WAAFL State Team Selection panel from 1966 to 1980.

In 1968, Ken became a WAAFL Tribunal Member, and in 1998 he was awarded a special Certificate of Recognition by the WA Football Commission.

The year 2000 was one of greatness for Ken as he was awarded the Australian Sports Medal, became a WAAFL Life Member and was also recognised by the Australian Football League with a certificate recognising his contribution to the game.

The WAAFL takes great pleasure in adding Ken Mathews to the Hall of Champions as a designated Champion of WA amateur football.