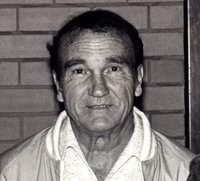 Laurence “Laurie” Arnold Tetley is a legend at the North Fremantle Amateur Football Club. Affectionately known as Mr North Fremantle, Laurie began his career with the club in 1934 at the age of 13, serving as the club secretary.

In 1941 Laurie joined the East Fremantle Football Club and was a part of their Premiership team in 1941, competing against his brothers’ side West Perth. During World War II he played in the VFL for South Melbourne before returning to East Fremantle in 1945. In 1946 he began his playing career with the North Fremantle Amateur Football Club.

Laurie played 160 games for North Fremantle and was renowned for his pace and prodigious talent with the drop kick, twice earning selection for the WA Carnival team in 1948 and 1951, as well as being a two time winner of the North Fremantle Amateur Football Club Best and Fairest award in 1946 and 1948.

Laurie was honoured with Life Membership of North Fremantle in 1964 with a bar added in 1975. The City of Fremantle named the gates at Gil Fraser Reserve the “Laurie Tetley Gates” in recognition of his outstanding work in football.

In 1961 Laurie was awarded Life Membership to the WAAFL before serving as Assistant Secretary from 1964 to 1966, also taking the responsibility as State Team Manager in 1962, the same year he served as Delegate for the Australian National Football Council.

He served as delegate again in 1967 and in 1974 and was awarded with a Certificate of Merit from the Australian National Football Council for his work with interstate teams.

Laurie Tetley’s work both on and off the field is still recognised to this day. The best player in the WAAFL state program is awarded the Laurie Tetley Medal. Each time North Fremantle and Fremantle CBC clash in A Grade, the clubs battle it out for the Laurie Tetley-Tom Naylor Trophy.

His elevation to the inaugural WAAFL Hall of Champions is an honour that sits comfortably on the shoulders of this great North Fremantle and WAAFL identity.