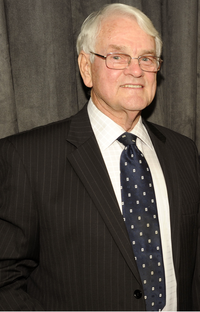 The WAAFL has great pleasure in welcoming Neil Donaldson to the Hall of Champions as a Champion.

Donaldson became involved in amateur football with the UWA Football Club in 1954.  First, as club Secretary with University who part of the Metropolitan Football Association from 1954 to 1960 before being elected as the club’s Vice President.

In 1968, Neil’s 252 games and tireless efforts for University were acknowledged as he was honoured Life Membership of the UWA Football Club.

In 1956, Donaldson became the University delegate to the WAAFL.  In 1971 he joined the inaugural WAAFL Management Committee, a position he remained in until 1979.

In both 1964 and 1967, Donaldson was the WAAFL State Team Runner.  In 1970, he was a State Team Selector and Carnival Director for the Australian Amateur Football Council Carnival in Perth.

The WAAFL Life Membership was bestowed on Donaldson in 1972.

His efforts continued to be recognised as he was awarded National Football Council Merit Award for services to amateur football in 1990.  In 2000, Neil was awarded an Australian Sports Medal from the Australian Government, and in 2003 was awarded AFL Recognition to Volunteers of Australian football.

In 2012, Donaldson was honoured with WA Football Commission Life Membership.  In 2014, he was awarded the Medal of the Order of Australia (OAM) for his service to Australian Rules football in WA.

The WAAFL thank Neil for his efforts in celebrating his 60th year of involvement with WA amateur football by inducting him into the Hall of Champions as a Champion.