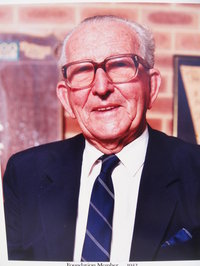 Thomas “Tom” Keaven Naylor was co-founder of the CBC Old Boys Amateur Football Club in 1933. He spent a lifetime helping the club and football in general. This resulted in him being awarded the WA Football Commission’s volunteer award in 1990.

Tom played over 350 games for CBC, serving as captain for three seasons and player-coach for nine. His football and leadership ability saw Tom selected to represent Western Australia at the 1936 carnival in Adelaide and 1938 carnival in Launceston, as well as playing eight WAFL games with South Fremantle and being part of their reserves premiership team.

After finishing his playing and coaching career, Tom devoted his life to administration where he played a huge role in the growth of amateur football in WA.

For a quarter of a century he was the Registrar for the WAAFL. This was an onerous task, being the go-to person for all amateur clubs wanting advice on registrations, transfers and all matters related to amateur football. He was Vice President for 5 years from 1961 to 1965, sat on the Board for 24 years from 1969 to 1992 and was also a state selector from the late 1940’s to the early 1950’s.

His dedication to the betterment of amateur football has seen Tom recognised by many. He was nominated for a certificate of merit from the Australian National Football Council by his cousin Bernie Naylor, a WAFL Hall of Champions member, and received the accolade in 1965.

To this day, the WAAFL Champion Colts team - awarded to the team with the lowest amount of yellow and red cards, most attendance at meetings, and most premiership points - is named the Tom Naylor Shield.

As a sign of respect for Tom, when arch rivals North Fremantle decided to strike an ongoing trophy to recognise their club champion Laurie Tetley, they invited the Fremantle CBC Amateur Football Club to nominate Tom Naylor to be a part of the trophy. Now when the two teams meet in any A Grade clash they play for the Laurie Tetley-Tom Naylor trophy.

Tom is a legend at Fremantle CBC and in the WAAFL.  He has influenced many footballers who have gone on to play at the senior levels of WA and Australian football, and now his name will live forever as a inaugural Hall of Champions member.