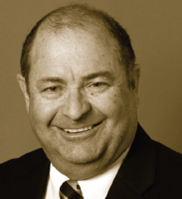 The WAAFL is proud to induct Trevor Howard into the WAAFL Hall of Champions for his remarkable commitment to football which has spanned junior, amateur, womens, country and the WAFL since 1970.

Trevor’s football career commenced with the Dowerin Football Club in 1966, a link and interest he still holds today.

In joining the Mount Lawley Amateur Football Club in 1970, he played 140 senior games.  He was a player’s representative on the club’s committee before being elected to club’s committee in 1979.

In 1984, Trevor was elected Mt Lawley President, a position he held for five years till 1989.  In 1983, He was awarded with Mount Lawley Life Membership and remained on the club’s committee until 1991, serving as Secretary, Treasurer and Coach during this time.

In 1980, he joined the WAAFL Board as a general member.  Only three years later, in 1983, Trevor was elected as WAAFL President.  This same year he also joined the Australian Amateur Football Council in an executive position, before becoming an All Australian Selector in 1985.

He also became a member of the WA Football Commission Football Development Trust in 1989 as the community football representative for three years until 1991.

In 1991, Trevor was awarded WAAFL Life Membership for his 21 years of impressive commitment and dedication.   The following year, he was employed as WAFL General Manager and was required to resign from all WAAFL and community football positions.  He remained in that role for five seasons.

In 2000, he was awarded the WAFC’s Volunteer Award for his services to community football.

Trevor returned to the WAAFL as a member of the Protests and Disputes Tribunal.  He again immersed himself in the WAAFL becoming the Mt Lawley Secretary in 2002, and a committee member from 2005 to 2007.  In 2004, he re-joined the WAAFL Board from 2004 to 2006.  In 2006, he became a member of the Subiaco District Football Development Committee.

In 2007, Trevor became WAAFL Vice President, which led him back to a role on the AAFC.  In addition to being a delegate, he was appointed Secretary/Treasurer for three years.  Also in 2007, he accepted the role of President of the WA Women’s Football League for a period of four years to assist in establishing sound governance.

In 2013, Trevor was recognised and rewarded for his long term commitment to community football with AAFC Life Membership.  In 2014, he was appointed Chairman of the WAAFL’s Competition Integrity Committee.

It is the WAAFL’s pleasure to induct Trevor Howard into the Hall of Champions for his extraordinary contribution to the game, and to community football throughout Australia.