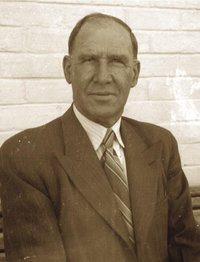 William Richard “Billy” Orr was a giant of Western Australian football. Many regard him as the father of amateur football because in March 1922, as secretary of the WA National Football League - the State’s major football competition - he instigated a meeting that saw the conversion of the Mercantile Football Association into what is today’s WA Amateur Football League. He was elected its first President and, satisfied that things were moving in the right direction, he stood down a year later and was elected Patron of the WAAFL.

“Billy” Orr started his playing career with North Fremantle in the WA National Football League, playing 32 games between 1904 and 1906 before transferring to Perth where he played 85 games over six seasons. In 1912 and 1913 he played in back to back premierships for Subiaco and led the league goal kicking in 1913 with 40 goals playing as a rover. His outstanding footballing ability saw him represent Western Australia on five occasions including the 1908 carnival.

Although “Billy” came back to play briefly with Subiaco in 1916 his playing career was interrupted by World War I. Like many footballers at the time he volunteered to go to war and on ANZAC Day 1918, Lance Corporal “Billy” Orr of the 51st Battalion was gassed and wounded in action and evacuated to England. On his return to Western Australia his playing days were over and he assumed his position as secretary of the WA National Football League.

“Billy” served for 35 consecutive years as secretary during which time he played a key role in negotiating with local councils to find enough football grounds to play on whilst lobbying for proper change rooms and facilities. He later moved to Maddington and was a member of the Gosnells Road Board for 25 years, 10 as Chairman, and was also a Justice of the Peace.

Perhaps “Billy’s” biggest achievement in his time in amateur football was his insistence that there always be a strong relationship between the WA Football Commission, as it is known today, and the WA Amateur Football league - a legacy which has been of great benefit to the WAAFL throughout its existence.

The following extract from a newspaper soon after Orr took over as secretary of the WANFL speaks volumes about Orr’s influence on the game:

“He is known officially as W.R. Orr but it is to his credit, and a mark of popularity that he answers easier to the name of “Billy” – a great worker for the game of games. Long may he be spared to do his bit for football.”

He resigned as WANFL secretary in 1953 aged 70 and passed away 10 years later.