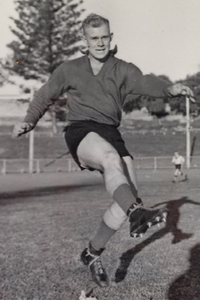 Des was the inaugural premiership coach of the Fremantle CBC league side in 1961 and was made a life member of the club in the same year. Des served on the committee from 1960-1970.

Des was included in the Fremantle CBC 1960’s Team of the Decade and was a Hall of Fame Inductee of the club in 2010.

Des Reed is inducted into the WAAFL Hall of Champions as a High Achiever.