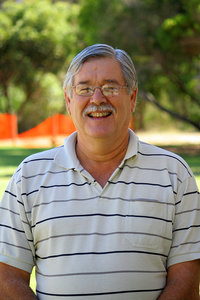 Alan Barnett’s football career began in 1969 when he first pulled on the boots for the University Amateur Football Club. He played 53 games over three seasons with University before moving to country football where his work on and off the field is legendary. The WA Amateur Football League is proud his long-serving career began with us and would like to pay due recognition.

Alan started his career with University’s Colts side in 1969. His talent was quickly recognised and he was moved to their A Grade side in 1970 where, in his first season, he completed the rare double and won both the leading goal kicker and association best and fairest.

Even more remarkably, he repeated the feat in the following season, again taking out both awards.

His outstanding form for University saw him selected to represent Western Australia at the Australian Championships in Brisbane. Although WA was unsuccessful in its attempt to claim the national prize, Alan’s football talent saw him selected as a part of the All Australian team.

After three successful seasons in the WAAFL, Alan moved to the Southern Districts Football League in 1972 where he continued his goal kicking form for the North Albany Football Club, winning the league’s leading goal kicker award in his first year.

Injury struck in 1973 and Alan took up a coaching position at North Albany, taking their colts to a Grand Final before returning to Perth.

Upon his return to Perth Alan joined the Swanbourne/Nedlands Amateur Football Club and began his work behind the scenes, serving on the committee for six years. After a stint in Port Headland he continued his work as a committee man back at the North Albany Football Club and served as their Vice President throughout the 1987 and 1988 seasons.

In 1989 he was elected as Vice President for the Southern Districts Football League and became President in 1990.

The Great Southern Football League was established in 1991 and Alan served as inaugural President, finishing his term in 1996. His outstanding commitment to football saw him awarded Life Membership in 1997.

Alan returned to North Albany Football Club in 1998 and served as their President until 2007, the same year which saw him awarded Life Membership of the club.