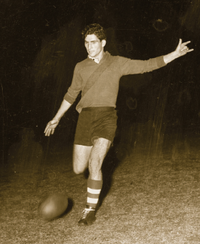 As one of the finest centre men to play WANFL during the 1950’s, the WAAFL inducts Anthony (Tony) Parentich into its Hall of Champions as a High Achiever.

Tony Parentich started his football career within the WAAFL competition, playing at centre half forward for the University Football Club in 1950 and 1951.

In 1950, Tony was recognised as the WAAFL A-Grade Best and Fairest and in 1951 was selected for WA in the Australian Amateur Football Council State Carnival held in Melbourne.

Tony proved himself as a highly skilled player in just two years, and in 1952 went on to join the West Australian National Football League.  He made his debut for the South Fremantle Football Club and at the end of the season was one of the best players afield as South Fremantle won the premiership in that same year.

He won further premierships with South Fremantle in 1953 and 1954.

Although South Fremantle could not continue their premiership streak into 1955, they did make the grand final in 1956 where Tony, although not taking home a premiership, was awarded the Simpson Medal as best on ground.

Winner of South Fremantle’s Best and Fairest award in 1957, Tony played a total of 162 WANFL games between 1952 and 1961.  Due to work commitment he did not pay in the WANFL competition in 1960 and played part of the season in 1961 before retiring.

In addition to his centre man position, Tony was known to be a focussed and skilled player easily slotting in on the half forward line either at centre half forward or on a flank.

A strong and skilled footballer in his prime, the WAAFL inducts Tony Parentich as a High Achiever into the Hall of Champions.