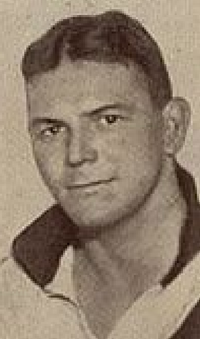 Bill Faul is one of WA amateur football’s great High Achievers. He played in Wembley Football Club’s first organised scratch match against Swan Valley in 1926, and was an inaugural committee member of the Wembley Football Club from its foundation year in 1927, serving until 1929.

Faul was an exciting all-round sportsman, playing football, basketball and cricket for the Wembley Athletic Club from 1926 until 1929, but his highest achievements were in Australian football.

From his humble beginnings at Wembley, Faul would go on to compete in more than 500 senior games for Subiaco, South Melbourne, Prahran, Northcote and Moorabbin. He still holds the Victorian Football Association’s record of most games as a player and coach with 313 appearances.

From 1932 to 1938 Bill Faul played 117 games for South Melbourne, and, in his first year, won the club’s Best and Fairest award and was runner-up to Haydn Bunton senior in the Brownlow Medal.

Bill Faul was part of the famous Foreign Legion, South Melbourne’s remarkable recruiting campaign in 1931 that lured players of the caliber of Austin Robertson senior, Johnny Leonard, Brighton Diggins, Bert Beard, James O’Meara, Laurie Nash (Tasmania), and Jack Bissett (Richmond). It was the beginning of the Depression, and players relished the chance to be given a full time job by the business supporters of South Melbourne.

Faul had won Subiaco’s fairest and best in 1931 and South Melbourne were looking for a classy half back flanker to play alongside legend Laurie Nash at centre half back. After 117 games with South Melbourne in the VFL, Faul went on to coach VFA teams, Northcote (1948), Prahran (1949-1952) back to Northcote (1953-56), and then Moorabbin (1957-59). Faul also spent time in charge of several teams in the Victorian Amateur Football Association, coaching approximately 144 matches. He also coached the VFA combined side in the 1950 and 1956 Carnivals.

In 1960 Faul took over as coach of South Melbourne, winning the VFL night premiership that year, and coaching the team in 1960 and 1961.

Tonight the WA Amateur Football League recognises the great contribution of Bill Faul to our Australian game by naming him as a High Achiever in our Hall of Champions.