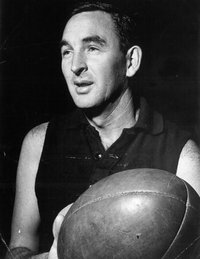 The WA Amateur League Hall of Champions reaches another milestone tonight with the induction of Brian Featherby as a High Achiever.

The induction of Brian means for the first time two members of the same family have been honoured in our annual award categories. Brian is the father of 2010 High Achiever inductee Peter Featherby, who starred at the senior level of football in WA and Victoria.

Brian Featherby has earned the respect of his own club, opposition teams, and amateur league officials for his devotion to amateur football in Western Australia, both on and off the field. His long and illustrious career saw him play 255 games for Wembley, including winning the club’s fairest and best award five years running, in 1960, 61, 62, 63 and 64 – demonstrating the impact he had on the amateur game.

Brian’s ability as a forward was emphasised when he was crowned the WAAFL’s leading goal scorer in 1958 and 1959. In total, Brian kicked 1003 goals in his amateur playing career, scoring 100 goals in a season four times. His great talent as a player was recognised with selection in WA Amateur State teams on four occasions: 1956, 58, 59 and 62.

Brian Featherby started his football career in the metropolitan juniors, playing three seasons for Wembley in the under-age competition. Several League clubs were interested in his talent and West Perth coaxed him to play for three seasons in their reserves team, where he won the fairest and best award in 1952. The lure of the amateur game ran strongly in Brian’s veins, however, and he rejoined Wembley to become one of the club’s all-time greats.

While Featherby was a great footballer for Wembley, he also contributed off the field where he was on the club committee for many years. His dedication to the club led to him being elected President of the Wembley Amateur Football Club in 1969.

It was no surprise a year later to see Brian Featherby named as a Life Member of Wembley, an award that was greeted with great enthusiasm by officials, supporters and players alike. Tonight the WA Amateur Football League salutes one of its all-time great contributors to amateur football by naming Brian Featherby as a High Achiever in our Hall of Champions.