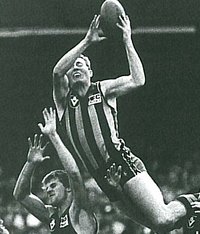 Gary William Buckenara is one of amateur football’s greatest products. He began his football career in 1976 playing for the Teachers Training College Churchlands, going on to play 50 games over three seasons in the WA Amateur Football League. His remarkable talent emerged early when in 1977 he won the WAAFL’s “E” Grade fairest and best and headed the goal-kicking with 78 goals. Recognising his talent, Buckenara was selected to play for WA against the Southern Districts Football League in Albany, the South West Football League in Bunbury and then against South Australia at Subiaco Oval.

The following year in 1978 he was a member of the Teachers Training College Churchlands Premiership team and again represented Western Australia, this time against the Great Northern Football Association and then against South Australia in Adelaide.

Subiaco snapped up the budding champion in 1979 and he remained there for three seasons and 61 games, finishing runner up in their best and fairest each year he was there. An incredibly skilful half forward with a unique ability to kick goals under pressure, Buckenara won the Simpson Medal in 1981, the same year he headed Subiaco’s goal kicking. In 2008 the Subiaco Football Club inducted Buckenara into their hall of fame.

Hawthorn was quick to recruit Buckenara after his three impressive years at Subiaco and in 1982 he debuted for the VFL powerhouse. He went on to play 154 games for Hawthorn and was a part of four Premierships in 1983, 1986, 1988 and 1989 in one of the most dominant teams in VFL/AFL history. Described by legendary coach Allan Jeans as Hawthorn’s “best big game player”, Buckenara’s talents were recognised when he was selected on the half forward flank on Hawthorn’s team of the century and in 2010 when he was inducted into the Hawthorn Football Club Hall of Fame.

Buckenara played in 11 State games - including being named Captain in 1988 and 1989 - and went on to coach the Sydney Swans in 1992. After handing over the reins in 1993 Buckenara returned to Western Australia, later coaching Subiaco in 1995 and 1996.

In 2004 Buckenara was an inaugural inductee into the WA Football Hall of Fame as recognition of his fantastic career and is now also honoured in the WAAFL Hall of Champions.