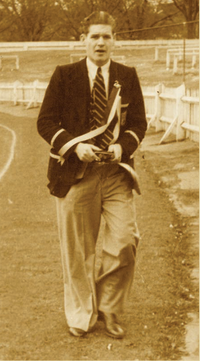 His career embraced playing, administration and coaching, which included being the foundation coach of the Scarborough Amateur Football Club. In 1972 he had the rare privilege, at the age of 45, of playing what was said to be his 200th game in a B Grade fixture for Scarborough alongside his two sons.

Jim McGann knew how to play at the top level, having represented the WA state amateurs six times from 1951 to 1959, the last at the age of 32. In the early 1950s McGann played several games with the Perth Reserves team in the WAFL, but his love was amateur football.

In an illustrious 25-year career, Jim McGann captained Victoria Park amateurs in 1950, and then played for Inglewood/Mt Lawley, before joining Claremont/Nedlands at Melvista Oval where he was captain coach. He spent a year in the wheatbelt as a captain/coach in the Mortlock League and then retired to coach his son’s school side, Servite College (St Phillip’s), in the mid-to-late sixties.

In 1970 McGann coached the inaugural Scarborough Colts to be runners up for the flag, staying in that position for 1971. The following year he coached Scarborough’s B Grade Reserves side, leading to him becoming the senior coach in 1974.

Like all achievers in amateur football, McGann was also active off the field and was vice-President of Scarborough from 1970 to 1973 and was awarded his life membership to Scarborough in 1989. McGann’s ability as a coach was recognised by the WA Amateur League who appointed him to coach the State amateur side in 1972 and 1973.

The Scarborough Amateur Football Club has made a proud contribution to amateur football in Western Australia and it is great that tonight we honour one of their legends, the late Jim McGann by admitting him to the Hall of Champions as a High Achiever.