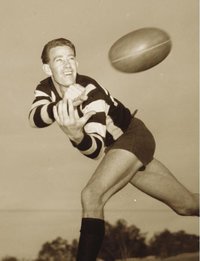 Keith (Spud) Slater commenced his senior football career in 1954 with the Midland Junction Amateurs before being recruited by Swan Districts Football Club the following season.

Slater went on to play 166 games for Swan Districts and win the club’s fairest and best on three occasions in 1956, 1957 and 1960.  During the same period, he also played test cricket for Australia.

Slater was one of the driving forces to Swan Districts winning a hat-trick of WAFL premierships between 1961 and 1963.

Regarded as one of the greatest grand final upsets in WANFL history, Swan Districts beat East Perth in 1961.  Slater went into the grand final with a broken rib against Australia’s greatest ruckman Graham ‘Polly’ Farmer.  He and fellow ruckman Cyril Litterick curbed the dominance of Farmer which saw Slater awarded the Simpson Medal for best player.

Whilst a fantastic WANFL player, Slater played an important role with the WA State Team.  He represented WA in 21 matches in which he captained three.  Slater was a major part of the legendary WA win against Victoria in Brisbane at the 1961 Australian Football Carnival.

In 1964 after 166 games with Swans Districts, Slater accepted the role as Captain/Coach at Subiaco Football Club.  He played a further 52 WAFL games with Subiaco. He ended his career back at Swan Districts in 1967 to complete a football career totalling 239 games and an impressive 257 career goals.

Whilst thoroughly immersed in football, Slater was also a fantastic cricketer for WA. His cricket career spanned 13 years where he accumulated 2198 first-class runs and took 140 wickets.

Whatever his sporting involvement, Keith Slater is an ornament to football and cricket in WA.  It is a wonderful testament to amateur football that a player as talented as Keith should be recognised as a High Achiever and his name added to our Hall of Champions.