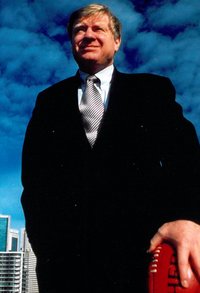 Richard Colless is one of amateur football’s all-time highest achievers. He started his career with University’s A Grade Colts in 1965 and over the next 15 seasons played and coached across a range of grades.

In total, Richard played a total of 199 games of amateur football for University and was involved in a variety of off field positions at the club including Team Manager, Secretary, and President.

Richard quickly moved up the ranks in amateur football and by 1968 was playing regular A Grade football with University. His form earned him selection as part of the 1969 All Australian Inter Varsity Team.

In 1978 Richard joined the Sunday Football League as coach of South Perth, but it wasn’t long before he was back at University, again being appointed coach of University’s A Grade side and in 1980, coaching their C Grade side to a Premiership.

He served as assistant A Grade coach in 1981 and 1982. His devotion to amateur football and University Football Club in particular saw Richard awarded his Life Membership of the club.

Richard’s undoubted business acumen saw him successful in the board room too. He was appointed as a board member of the newly established independent WAFL board in 1984 and served as Chairman of the Review Committee in 1986. This committee was tasked with looking at a Western Australian team’s entry into the VFL. His work ethic, football knowledge and drive saw him appointed as Chairman of Indian Pacific, the vehicle that resulted in the West Coast Eagles entry into the AFL.

After moving interstate to pursue his business growth, Richard became a board member of the Sydney Swans in 1993, becoming Chairman of the club in 1994, a position he holds to this day.

His work with the Sydney Swans led to his appointment by the AFL to Chair a Task Force to look at growth of football across New South Wales, and then, from 1998 to 2002, he chaired the Task Force appointed to further develop the game in New South Wales and the Australian Capital Territory.

The WAAFL takes great pleasure in announcing Richard as one of the inaugural recipients of the High Achiever Award.