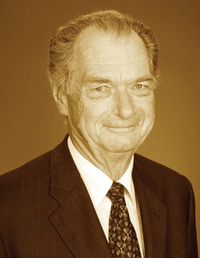 Ross Kelly has achieved more than most in Australian Football. When he played his first amateur game for Maylands in 1956 nobody would have thought his career would reach the highest levels of administration in Western Australian football.

From those 42 amateur games in 1956 and 57, Kelly would go on to play 132 games for the West Perth Football Club and represent Western Australia 10 times over six seasons. But it was his role in decision-making that took over and saw him elevated to many important posts in football, most at critical times of development of the code.

His outstanding involvement saw him become a commissioner of the WA Football Commission in 2002 for eight years.

In another important role, Ross Kelly was appointed inaugural chairman of the Clontarf Foundation in 1999, a position he held until last year.

Back in 1956, Kelly played 20 games for Maylands amateurs before he joined Collegians the next season and played a further 22 games.

A West Perth official, Colin Cavanagh arrived on Ross’s doorstep during the 1958 pre-season and told him to collect his gear and come to training. After playing the first 11 games for West Perth, Kelly suddenly found himself selected in the Western Australian State Team to play in the Australian Championships in Melbourne. He made his State debut on the MCG.

Kelly was an important member of West Perth’s premiership team in 1960. After his first 60 games, Kelly left on a 12-month overseas business trip in 1961. He returned to West Perth in 1962 and played for another four more seasons, retiring at the relatively early age of 27 to pursue other interests.

Ross Kelly has made an indelible mark on Australian football at all levels of the game. Despite his elevated positions in football he always has taken an interest in the amateur game and has been a sounding board for lots of amateur decision-making.

The WA Amateur Football League is pleased tonight to announce that we recognise the unlimited talents of Ross Kelly by naming him in our Hall of Champions as a High Achiever.