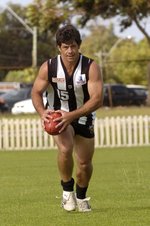 In 2009 Shane joined the Mount Lawley Amateur Football Club where his brother Damon was playing. He assisted Mount Lawley in winning the B Grade Grand Final which allowed them to be elevated into A Grade the following year.

He won the WAAFL B Grade Fairest and Best and was judged as the Best on Ground in the Grand Final.

In 2010 he coached the Mount Lawley A Grade side finishing just one game out of the finals. He returned to coach the side again in 2011 finishing on top of the ladder before losing the Grand Final to University. This Grand Final appearance is the best A Grade effort for Mount Lawley since their run of premierships in the late 80’s and early 90’s.

Shane is an ambassador for the Swan Districts V Swans Program and often returns to Mount Lawley to take old footballs, boots and clothes with him for the kids in the Pilbara.

The WAAFL inducts Shane Beros into the Hall of Champions as a High Achiever.