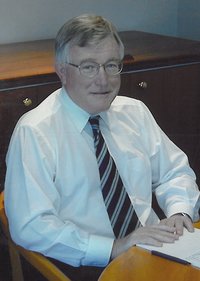 Terry “Boof” O’Connor AM has a proud history in football as a player, coach and administrator. Once described as the heart of the University Football Club, Terry played more than 250 games for Uni over 16 years, being awarded a Half Blue in 1959 for outstanding sporting achievement. Once retired from playing Terry then went on to the highest echelons of Australian Football – firstly as West Coast Eagles Chairman for three seasons, including the 1992 Premiership season, and then as an AFL Commissioner from 1993 to 2000.

As a player Terry O’Connor was a tough and resolute defender. He started his football with University in the metropolitan juniors and was a great club man, serving as president, secretary, captain, coach and playing in almost every grade in the club. The following extract from James Wieland’s book, The Green Machine, the official anecdotal history of the University Football club, describes the way Terry played:

"Many an opposing forward badly misread “Boof” who, with his long shorts (sometimes held up by an old tie), scuffed boots, fruity accent and G.J. Cresta horn-rimmed thick plastic glasses tied behind his ears, looked like someone who had wandered in from a 1920s English novel. But, built like abrick dunny, these same forwards soon learned that, despite his appearance, he was fearless and would run through anyone who got in the way as he cleared the ball with deep, penetrating drop kicks into the forward line."

Off the field Terry’s keen academic mind saw him play important roles in the development of football, from setting up the WA Football Commission to becoming chairperson of the Task Force appointed to develop football in New South Wales and the Australian Capital Territory. Outside of football he was also a high achiever: he became a QC in 1987 after studying law at the University of Western Australia, subsequently being appointed chairman of the Western Australian Anti Corruption Commission and was Chancellor of Notre Dame University from 1990 to 2005.