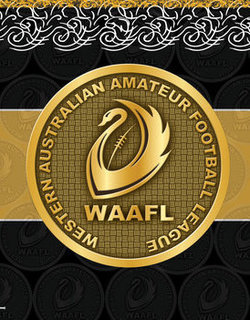 On Monday 3 September the Crown Ballroom was filled with over 900 guests to celebrate the 2018 WA Amateur Football League season.

One of the biggest attendances in recent years saw many awarded for their outstanding seasons.

Scarborough’s Joel Ashman took out the night’s top award as he received the CJ Jamieson Medal as the A Grade Best and Fairest player for 2018.

A first-time winner of the award, Ashman polled 20 votes in eight games including five best on ground performances. Ashman finished runner up for the award in 2017 falling short by just one vote.

Ashman finish two votes ahead of Nicolas Reid from the North Beach Football Club, while a three-way tie for third position saw Trinity Aquinas’ Jamie Birrell and Dene White and Scarborough’s Marc Re finish on 16 votes.

Andrew Fisher from the Kingsley Football Club won the TR Howard Medal as the B Grade Best and Fairest winner. The win saw Fisher claim a fourth straight association Best and Fairest after claiming the C1 medal for the past three seasons.

For the first time the night featured Women’s Awards as 2018 saw the launch of our Women’s competition. The A Grade Women’s Best and Fairest was a tie between Rebecca Viney from North Beach and Jessie Barker from Curtin Uni Wesley. Rossmoyne’s Phoebe Cahill took out the Best and Fairest award for the Women’s B Grade while Clair Edwards kicked 23 goals for the season to be awarded the Women’s A Grade leading goal kicker.

The Ron Webster Memorial award for the senior champion club was awarded to Jandakot Football Club who had an impressive year with their league, reserves and colts’ sides all making the Grand Final. The TK Naylor award for the Colts champion club was awarded to Secret Harbour. The champion club awards are calculated by both on and off field points with points awarded for each win, meeting attendance, payments, paperwork submitted on time. Points are deducted for send offs and for match day fines.

The LA Tetley award for best player of the 2018 State Program was awarded to Matthew Ah Siu from Bullcreek Leeming for his performance across the two state matches which saw him awarded Best on Ground on both occasions. Ian Wright from the Kalamunda Football Club won the administrator of the year while Secret Harbour’s Russell Swanson won the Ken Armstrong Senior Community Coach of the year Award.

Congratulates to all our winners as we conclude another season of Amateur Football.