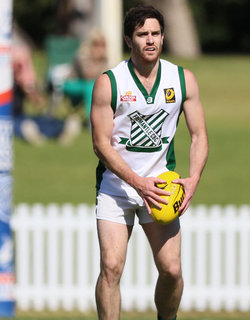 Fremantle CBC’s A Grade side will be led this year by long time club servant Chris Basile.

Basile started playing Colts with the Fremantle CBC Amateur Football Club in 2005 before a short stint in the WAFL with East Fremantle.

Chris won the CJ Jamieson Medal as the association Best & Fairest in 2016 and 2017 as well as winning the Fremantle CBC best and fairest six times, making him the most celebrated player in the Club's 87-year history.

Fremantle CBC president Brad Grant said that “Chris was an exceptional captain of our club, his on field performances were often inspirational and although many champion footballers fail to excel when coaching I have no doubt Chris will make the transition a successful one”.

“Watching him coach in the preseason reinforces that opinion and we are wrapped to have him leading us this year” said Grant.

Basile takes over from Ben Taggart who led the side for three seasons, which included reaching the A Grade Grand Final last season.