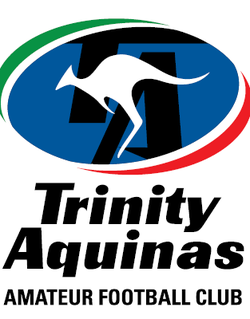 Luke has also spent time on the Trinity Aquinas committee and the Perth Football League board.

Jason Mileti will become the fourth Trinity Aquinas player to reach the milestone when he represents the club for the 300th time this Saturday 20th July at Bill Grayden Reserve.

Jason has also played across various grades from A Grade through to D1 Reserves winning a D1 grade premiership with the club in 2015. He was named best on ground in the 2015 grand final and won the 2016 D1 grade association best and fairest.

In a year of big milestones for the club Simon Franich reached 250 games for Trinity Aquinas last month. Simon played his 250th against Scarborough at Bill Grayden Reserve on Saturday 29 June.