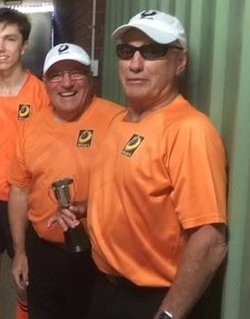 Noel Edgar started his involvement in football in 1966 when, together with schoolmates they formed Old Wesley Football Club (now Curtin Uni Wesley). He was a premiership player in 1966 and runner up in 1967.

Due to injury he started field umpiring in the Perth Football League in 1971 and has been umpiring ever since.

He has umpired matches from A Grade through to H Grade including over 120 A Grade games.

In 1995 he was awarded the Umpire of the Year and was recognised with Life Membership of the Umpire’s Association in 1999.

2019 marks his 50th year with the amateurs and he said he keeps umpiring because he enjoys the mateship, buzz of a game each weekend and the finals.

Noel was hoping to reach 1000 games as a field umpire however due to a knee operation he moved into goal umpiring in 2016 where he has umpired nearly 100 games.

His best moment in umpiring was when his two sons ran boundary with him for his 350th game and all the finals he has umpired.

Noel becomes just the seventh umpire to reach 1000 games and will be umpiring this weekend at Beasley Park in Leeming.